skip to main | skip to sidebar

Once Upon A Time In Harlem 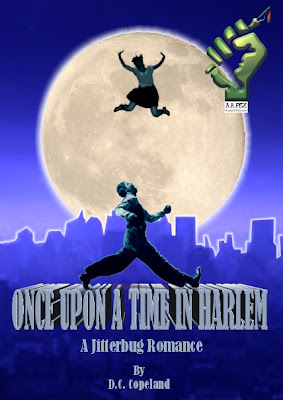 A jitterbug love story woven between the lives and times of legendary black entertainers, black and white thugs, and the common man in swinging 1930's Harlem.

Available as a screenplay and a three-act dance/drama by D.C. Copeland. Registered with the WGA. The radio play/reading version is the Winner of the AAPEX Jaz Dorsey Fusion Award and is available for purchase here. It's perfect for the high school and college classroom.

What makes this story unique is that it's based on thoroughly researched facts about an eye-opening, almost forgotten period in black entertainment history and pop culture nearly 80-years-ago and puts to rest once and for all any reasoning for using the "N-Word." At the time of this story, Cab Calloway is 22-years-old and just beginning to make a name for himself. Bill “Bojangles” Robinson is over 50-years-old and, although he is famous in New York, he is still unknown to the world (it occurs two-years before his first movie “The Little Colonel” with Shirley Temple). “Air steps,” the Jujitsu type dance moves that made the jitterbug famous, were just beginning to make the scene. The Jolly Fellows were a street gang in Harlem that was famous for its toughness and its dancers. In fact, its founder, Herbert White, later formed the “Lindy Hoppers” and was instrumental in bringing that dance to the world. The white and black gangland violence in the script? It all happened in an almost forgotten time in America’s most mythic city: Harlem.

Brief Synopsis: BILLY RHYTHM is the quintessential American: he never gives up despite all the obstacles thrown his way. He thinks he's the best dancer in Harlem and when he meets THARBIS JEFFERSON, a "copper colored gal" from the latest Cotton Club revue, he decides to partner with her to win the club's dance contest to prove it. Unfortunately, his former gang, the Jolly Fellows, famous for being the toughest-- and best dancers-- in Harlem, have entered their own champions, SHORTY SNOWDEN and BIG BEA. By the time the climatic dance contest begins, the black street gangs and the white gangsters have been very busy killing their own and this murderous anger finds its way onto the dance floor. Razor blades are unleashed on Billy and Tharbis as they brush the encroaching crowd on the dance floor and by the time they win the contest through some amazing mind blowing steps, their clothes are shredded and covered in blood. Billy's last words to the bad guys-- both black and white-- are the kind that get an audience up on their feet to cheer their heroes on as they grab each other for support and stumble into the black Harlem night.